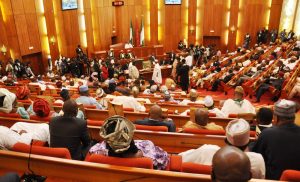 Members of the Senate Committee on Privileges and Public Petitions have over the weekend, arrived Anambra State for an oversight function.

The visit was led by its Chairman, Senator Ayo Akinyelure, Senator Sam Egwu, Senator Hezekiah Dimka, among others.

Tribune Online gathered that they were in the state in response to a petition against a company, illegally operating in Ogwuikpele and Ogwuaniocha Communities in Ogbaru local government area of the state.
The Chairman, Senate Committee on Ethics, Privileges and Public Petitions, Senator Ayo Akinyelure explained that theirs is a Special Committee of the Senate that oversights all agencies of government, stressing that they have unlimited scope of operation, and stated that their visit is to confirm whether the allegation is true or false.

Senator Akinyelure explained further that they got a petition that one Sipco Nig. Ltd has been operating in Anambra state for years, without Memorandum of Understand MOU, with government and the affected communities, pointing out that at the end of their visit, recommendations will be forwarded to the Senate to decide the matter.

Responding, the state Governor, Willie Obiano who commended the Committee for granting a first hearing on the matter, noted that the company in question has refused all manner of approach by the State government, stressing that what the company did was that they identified and randomly selected people in the affected communities who don’t represent the communities, to connive with.

While asking the Committee to look at the case dispassionately, the Governor said companies operating in the State are protected, adding that State government will not appreciate a situation where community members will start agitation because the impact of what the company is doing, is already affecting the communities.

Earlier in their separate reaction, the Secretary to the State Government, Professor Solo Chukwulobelu, Chief of Staff to the Governor, Chief Primus Odili and the Chairman, Ogbaru Local Government Area, Hon. Arize Awogu stressed that State government observed that the visit is because the company’s operation did not follow due process.

Also present at the event were members of the Anambra State Oil and Gas Development Committee, led by its Chairman Engr Frank Edozie.