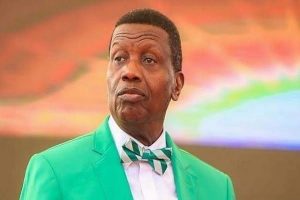 The Senate has lauded the Redeemed Christian Church of God (RCCG) and its General Overseer, Pastor Enoch Adeboye, for rehabilitating the Ife-Ifewara Road, at a cost of N188million.

This is even as the Senate directed Messrs. Cartil Construction Nigeria Limited, that had abandoned the project after collecting mobilisation fee, to refund N140million
to the Federation Account.

The resolutions of the upper chamber followed its adoption of the recommendations of the Chairman, Senate Committee on Ethics, Privileges and Public Petitions, Senator Ayo Akinyelure at plenary on Wednesday.

Part of the Senate resolutions reads: “That the Senate commends the RCCG for alleviating the suffering of Ife-Ifewara community by rehabilitating the Ife-Ifewara road project in Osun State.

“That the Senate do urge the FMW&H to formally terminate the contract for the road project awarded to Cartil Construction Nigeria Limited in 2010 and abandoned since 2011 and recover the sum of N140million released to the company.

“That the Senate do urge the FMW&H not to make any refund to the RCCG for rehabilitating the Ife-Ifewara road because the Church rehabilitated the road as a social responsibility support to Osun State.”

The RCCG had petitioned the Senate calling on the Federal Government to recover the money already paid to the contractor that later abandoned the road.

“The contract to rehabilitate the road was awarded by the Federal Ministry of Works and Housing Cartil Construzioni Nigeria Limited in 2010 because the project was a zonal intervention project of a former member of the National Assembly domiciled in the Ministry’s budget.

“That Cartil was paid for the first interim statement in the sum of N99,414,115.76 and the second interim statement of N52,094,785.46…but the contractor only achieved 26.21% project completion and stopped further work on the project.

“That the aide-Ifewara community beckoned on the RCCG to intervene and the church graciously rehabilitated the road between 2016 and 2019 as part of its contribution to the development of Osun State and Nigeria and expended the sum of N188, 440,342.00, though without seeking permission/approval from the Osun State Government or the
Federal Government.”